He might be the first son of Dancehall artist Vybz Kartel but he’s not the first to make the Worl’ Boss a grandfather. Likkle Vybz, born Adidja Jaheim Palmer, who turned 18 earlier this year in April, has now joined his younger brother Akheel Raheim Palmer, aka Likkle Addi in expanding Vybz Kartel’s legacy with news that he’s expecting his first child.

A recent photo has popped up online that confirms Likkle Vybz‘s girlfriend is pregnant with his first child and the two couldn’t look happier.

It was just a year ago in May 2020 that Vybz Kartel revealed that his second son Likkle Addi, who was 15 years old at the time, officially made him a grandfather. The entertainer’s long-time partner, Tanesha ‘Shorty’ Johnson also shared photos of Addi and his mystery lady’s baby shower that set off a conflagration of criticism and concern for the young couple online. 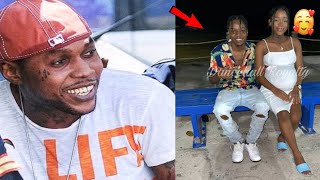 The 44-year-old granddad-to-be, however, sought to quiet the crowd by saying, “Don’t worry bout those two millionaires. What the f— you think i work so hard for..#legacy”. He had stated in a prior interview that his children are well supported by the millions of dollars he’s been making from behind bars.

Vybz Kartel also shared a photo of Likkle Addi and his older 18-year-old pregnant girlfriend at the time with the caption, “Congrats to me son & daughter and extended family #newgeneration #gazanation #whovex #gazarmy #1don.”

Unlike his brother, Likkle Vybz has been getting nothing but love and congratulatory mentions online regarding the news of the upcoming birth of his child.

Now that Likkle Vybz turned 18, he is expected to take over his father’s Portmore Empire Music Label, Adidjaheim Records as CEO of the company. He’s already mapped out how he plans on running things from here on out with brother Likkle Addi riding shotgun.

The two form the music duo UTG with several singles under their belt already, among those are Give Thanks and Style, which were released in April. They released their Skinny Jeans EP a year ago and both collaborated with their father on his To Tanesha and Of Dons of Diva albums last year and the Dancehall Royalty EP, which was released in January.

Shenseea spotted at Kanye West “Donda” event, “DID SHE SELL HER SOUL” (photos/video inside)