There has been a feud between jah cure and popcaan. So the story goes that jah cure had a meeting at his house with someone he has been dealing with.

The meeting wasn’t going as jah cure wanted it to and he allegedly got upset and said that the person can’t leave his premises until agreed upon the terms that he desire the person to do.

The woman allegedly got scared of jah cures behaviour and called dancehall artist popcaan to come to the rescue. The artist allegedly went to the house with another entertainer who appears to have a license firearm. 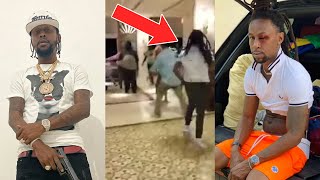 Upon arriving at the house popcaan reportedly called jah cure several times on his cell phone and he did not get an answer. It has been said that the entertainers tailgate in the townhouse to get the person.

When he got inside the house jah cure got even more upset and a bigger altercation started among them.

He was wondering how he got inside and felt violated he then went for his machete and the other entertainer draw his gun in defence.

At this time neighbours had already been out and watching the incident, the entertainers then left the premises with the person they initially went there for.

The story was told by footha hype who got the information on the allegations.

BREAKING NEWS: Silk Boss get box up by gunman (viral video inside)

Side Chick stabbed to death by her sugar daddy’s wife (graphic...

Woman gives birth to a goat after her husband obeah her...

Woman commits suicide after her babyfather cheated and got another woman...