A voice note was recently circulated with a man from the community explaining what took place.

According to the man in the leak voice note, everyone including Ninja man and the Jamaica Constabulary Force (JCF) know who killed him.

“Ninja man son is a murderer. him mix up and involve in a lot of violent things, the man said.” 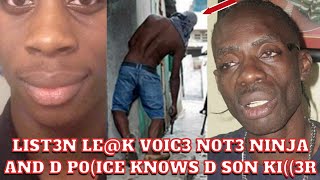 According to a report from the police’s Corporate Communications Unit, Ballentine, otherwise called ‘Roy’ or ‘Ratty’ of a Lower Mall Road address, was killed by unknown assailants at 8:45 a.m. It is reported that explosions were heard by residents who summoned the police, and, on their arrival, Ballentine was seen with multiple gunshot wounds. He was assisted to hospital by residents where he was pronounced dead on arrival.

A relative of the deceased said Ballentine had gone to look at a motor vehicle crash when he was attacked. She stated that she did not know the reason for the shooting but stated that the entire family is in mourning.

“He has a daughter that will never get to see her father again. We really miss him because he was a loving person. I am not sure why anyone would want to kill him because he was well-loved,” she said. “It never easy to lose someone that yuh love and to know that his father and brother, who is lock-up, will never see him again, (it) harsh. I know some persons are going to have a lot to say because he’s Ninja Man son but he was a really good person.”

Ninja Man, whose given name is Desmond Ballentine, is serving a life sentence for the 2009 murder of Ricardo ‘Ricky Trooper’ Johnson.

He must serve at least 25 years in prison before he is eligible to be released on parole. His son, Janeil, and co-convict Dennis Clayton will each have to serve 15 years behind bars before being eligible.