CHICAGO — A woman charged with fatally shooting her 12-year-old son Saturday at her home in the South Chicago neighborhood was ordered held without bail Sunday.

Fallon Harris, 37, is charged with first-degree murder in the death of her son in the 8000 block of South Bennett Avenue, officials said.

Harris confronted the boy about 10:15 Saturday morning about the whereabouts of a digital memory card she had removed from her vehicle the previous night, according to Cook County State’s Attorney Eugene Wood. 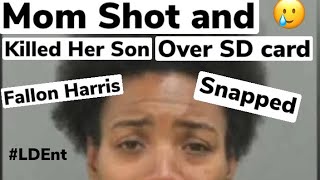 After he was unable to produce the memory card when his mother demanded it at gunpoint, she shot him, Wood said Sunday during Harris’ initial court appearance.

A witness found the boy unresponsive with a gunshot wound to the head about 10:30 a.m., police said. He was pronounced dead at the scene.

Harris was taken into custody shortly after the shooting, which appeared to be a case of domestic violence, according to police.

Harris’ court-appointed attorney described her client as a lifelong Cook County resident who has worked as a city laborer “for some time now.”

A judge ordered Harris held without bail. She is next due in court Monday. The judge also signed a health care order allowing Harris to be evaluated.