UA team of firefighters was called to extinguish a blaze that destroyed a section of a house in Waterford, Portmore, St Catherine on Saturday.

Reports are that while fighting to bring the fire under control it was found that a mother allegedly had left her 4-month-old baby in the house to attend an illegal party that was taking place at 1:00 am during curfew hours.

Sources claim that while firefighters were battling to put out the blaze they heard music blaring away at a party in the wee hours of the morning. 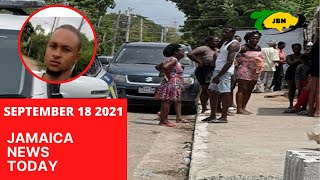 Another source from the first responder’s team said while officials were at the location trying to bring the fire under control a woman was seen running towards the blazing house crying out that her child was in the house.

The first responder would later disclose the development on his social media page.

“Follow up to the 1am fire ,so a woman run come breathless from the party enuh her baby was in the house looks like 4 months old and a bawl bout wha fi duh mi a tremble,” the first responder posted on his social media page.

Reports are that the child was removed from the building and was unharmed.

Police have not disclosed the results of their investigation into the matter.