The teenager has been convicted of murder and will be sentenced on March 10. 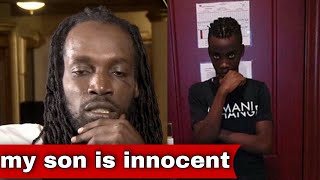 “Really would like to express my gratitude to all the Fans, friends and family who said positive and encouraging words throughout this terrible time.

The police came to my home and took my son from my house in Norbrook, lock up 5 other family members for no reason, which resulted in two of my family members losing their jobs because they were in jail for days without any charges.

This man also went on the stand and said that these same police officers who carried out the arrest of my son & my family from my home are working for me and he feared his life.

The same man who claim he feared his life, still gave over 14 pages of statements? The inconsistencies inna this man statement only shed light on the corruption.

But I promise to fight for the lives of these Two innocent youths. It’s like my son was found guilty before trial, but I’m going to point out everything and the injustice one day at a time, the superstar said.”

Pregnant woman hang her self along with her 2-year-old daughter (horrifying...

15-year-old pregnant girl and her 25-year-old boyfriend shot & killed in...