Its reported that a Jamaican couple and their young baby was kidnapped and killed in Orlando, Florida moments ago.

It is said that they were murdered by their family friend who goes by the name “Dujuon Griffiths”. the Jamaican couple who is originally from Montego Bay migrated to the US where they was killed along with their young child.

The perpetrator “Dujuon Griffiths” who kidnapped the couple and their daughter, shot and killed them in cold blood. 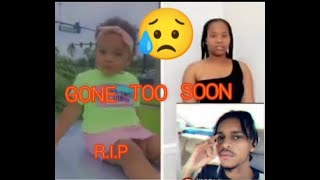 Police are now doing their investigation and trying their best to locate the perpetrator.

The mother known as “Carla” is a youtuber who vlogs her daily lifestyle. she started her Youtube channel 2 years ago. her child “Karlie” is 9-months-old.

Her baby father whose name is not yet known, succumbed to injuries and died in the hospital moments ago.

MORE TO COME AS THE STORY DEVELOPS.