A 22-year-old alleged gunman has been charged with murdering 10-year-old Jezariah Tyrell.

Jezariah was killed last week while she slept at her home on Wildman Street in Central Kingston.

The man charged has been identified as Tommy Powell. 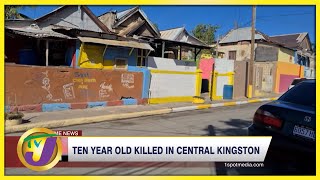 Powell is otherwise known as Red Head. He is a labourer of 29 James Street in Kingston. He was interviewed in the presence of his attorney today and charged.

Powell is charged with murder, shooting with intent and illegal possession of firearm and ammunition.

He’s to appear in court in the coming days.

Pregnant woman hang her self along with her 2-year-old daughter (horrifying...

15-year-old pregnant girl and her 25-year-old boyfriend shot & killed in...